You are here: Home / Board Games / Cash ‘n Guns 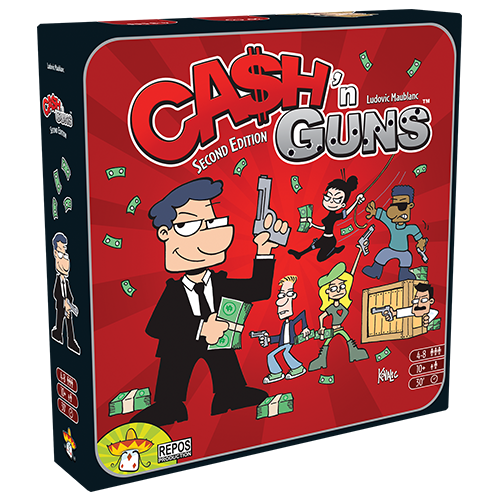 In an abandoned warehouse a gangster band is splitting its loot, but they can't agree on the split! It's time to let the guns talk and soon everyone is aiming at everyone. The richest surviving gangster wins the game! Ca$h 'n Guns helps you relive the best scenes of your favorite gangster movies. The goal is to have more money than anyone else after eight rounds while still being alive. Each round, one player is the Boss, and he controls the pace of play. First, loot cards are revealed on the table to show what's up for grabs. Next, players load their guns by secretly selecting either a "Bang!" or a "Click! Click!" card from their hand. The Boss counts to three, and on "Three" each player points his foam gun at someone else; due to his status, the Boss can tell one player who's pointing a gun at him that he needs to point it in another direction. After a pause to observe threats and measure the seriousness in an opponent's eyes, the Boss counts to three again and anyone who doesn't want to risk getting shot can chicken out and remove themselves from the round. Everyone who's pointing a gun at someone still in the round now reveals their card, and anyone who's the target of a "Bang!" takes a wound marker and gets none of the available loot. Starting with the Boss, everyone still in the round takes one loot card at a time from the table — money, diamonds, paintings, the position of Boss, medical care (to remove a wound), or a new bullet (to add a "Bang!" card to your hand) — until everything has been claimed. After eight rounds, the game ends. Whoever has the most diamonds receives a big bonus, and paintings score based on the number of them that you've collected. Whoever has the most valuable stash wins!

As part of celebrating our 14th anniversary as a store, we’re raising money to significantly upgrade our HVAC unit before the sweltering summer months reach us. If you wish to contribute, you can donate here. Any donation of $30 or more entitles you to a shirt or playmat featuring brand new exclusive art by Sadie Entwisle. These shirts and mats will be produced based on the number of donations we receive during the week of February 6th to 12th, 2023, will be available for pick-up some time around the end of of February or early March, and will never be made available again.