You are here: Home / Board Games / Pavlov’s Dogs 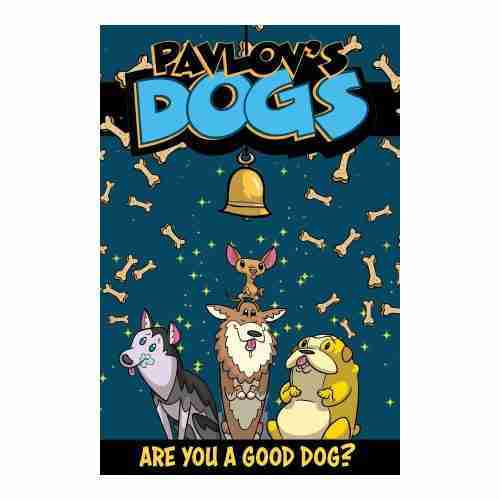 Pavlov’s Dogs is a pseudo-psychological card game of memory and conditioning. A fast, engaging game of following the rules and acting like fools! You’ll be drooling for more! Players are dogs working together during a series of tests (rounds) given to them by famous Dogtors such as Sigmund Fetch, Collie Jung, and Bark F. Skinner! Each round one player is the Dogtor and ensures that the dogs are following the rules. All players start with 3 bones. If they ever make a mistake they lose a bone and if one player is out of bones the game ends immediately. However, The dogs (players) are tested each round by being dealt 5 cards from the test desk which they do not look at. The test deck consists of numbered cards in 3 suits (BLUE,YELLOW and BROWN) each featuring 6 different dog commands (SIT,SHAKE,SPEAK, FETCH,ROLLOVER and BEG). There are also 6 BELL cards in the test deck which are WHITE and valued at zero. On a player’s turn they will flip one of their dealt test cards and say the total value of the test. The first player may flip a YELLOW SHAKE ONE and they would state “ONE”. The second player may flip a BROWN BEG TWO and they would state “THREE”, and so on. The parameters/rules may change the value of a card or add an action requirement when a card type is played. Example rules are: SIT commands = ZERO or Bark when any BLUE card is played. Each round another parameter/rule is added making it more challenging to complete the full series of test. It is the Dogtor's job each round to ensure the dogs are following the rules. If a dog announces the total value of the test correctly, the Dogtor will say GOOD DOG. This signifies that the dog was correct and the next dog (player) may go. In the event that a dog is incorrect, the Dogtor will say BAD DOG. Whenever you are a bad dog, you lose one bone. The Dogtor then resets the total test value to zero and play continues until all dogs are out of test cards. The game end immediately once one dog is out of bones and all players fail. However, players may share bones in between rounds as long as each player has at least one bone but no more than 3 bones. If all players still have bones at the end of your final round, you pass! Your collective score is based on the total number of bones at the end of the game. Pavlov's Dogs has 3 levels of difficulty: Puppy (3 rounds), Dog (5 rounds) or Wolf (8 rounds). All players decide their level at the beginning of the game to determine the number of rounds they will play. There is also a fun TEAM VARIANT in which players split into 2 teams and play 4 rounds to determine who did better. —description from the publisher